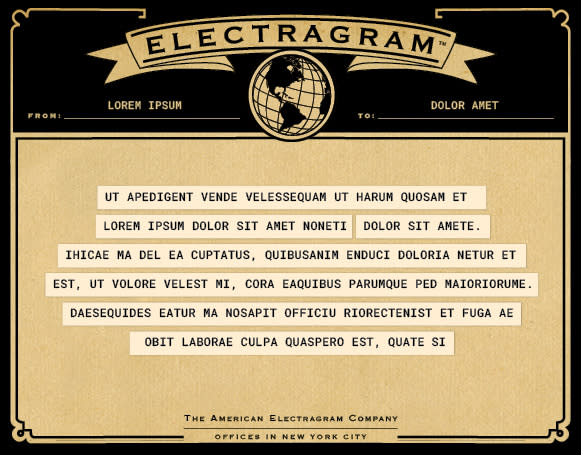 The handwritten note that arrives in your mailbox – in a real paper envelope with US postage in the upper right corner – is a dying art. Or already dead, supplanted by text messages, emails, DMs or e-cards – digital communication that requires a minimum of thought, they are as ephemeral as clouds, and often festooned with typos.

Enter Anna and Graydon Carter’s Electragram. Launching on Tuesday, the digital communications platform gives users the ability to create their own signature correspondence with a menu of colors, icons and artwork that can be delivered via email, text, social media or any messaging app. The startup counts Jony Ive and Tory Burch (both longtime friends of Carter) among its angel investors along with founding investors Isabelle Harvie-Watt and The Cycladic Group founder Dimitri Goulandris. Harvie-Watt, formerly chief marketing officer at Valentino, has extensive experience in the world of luxury fashion, including stints at Giorgio Armani, Versace and Tod’s Group. Anna Carter is co-founder and CEO with Angela Panichi as chief design officer, John Tornow as chief technology officer, Cindy Sperling as chief operating officer, and Alex Dickerson as chief marketing officer. Graydon Carter is chief creative consultant.

The seed for the idea was first planted in 2018, after Graydon Carter resigned as editor-in-chief of Vanity Fair and the family decamped for a year to a rented villa in Provence, France. .

“It was in France that we realized that the means of staying in touch with friends and family were really limited,” says Anna Carter. “We were big fans of handwritten notes, but it would take weeks for them to arrive. So your options were really email, which was very convenient, and text, which is very laid back. Phone calls were difficult because that first of all these days I feel like you almost have to text someone to set up a time to have a phone call or else they feel a bit intrusive. we realized was that there was nothing in the digital space that was sleek and beautifully designed.

Electragram will launch with over a dozen designs (from the classic Telegram to a pineapple, typewriter, lips, martini, take-out box with chopsticks, palm trees, teddy bear). There’s also a portfolio of customizable options for members, including illustrated monograms and icons, colorful backgrounds and borders, and designer fonts. The premier subscription offer is $10 per month and includes unlimited Electragrams and access to exclusive limited edition designs. Those who don’t want to commit to a monthly subscription can purchase fully customizable Electragram stationery for $1 per Electragram or a set of 10 for $7.50. Users who are not members will be able to submit the classic Electragram design for free, without personalization.

Graydon Carter, a prolific illustrator, drew the first Electragram during the family’s self-exile in France. It’s inspired by the iconic old-school telegram look with a black border and globe icon on a manila background. Company slogan and brand proposition — “When the mail is too slow. And email is too light” – is meant to evoke a more civilized era where personal communication was not reduced to emojis, GIFs and acronyms.

“One of the things I really want to do is rekindle an interest and a love for the lost art of elegant communication,” said Anna Carter.

This may seem like a lost cause in our current ill-mannered times. But during a Zoom chat last week from her husband’s office at their home in Roxbury, Connecticut, Carter is effortlessly persuasive. The British-born fashion industry veteran (she started her career in communications at Giorgio Armani and went on to manage UK press and advertising for Ralph Lauren before focusing on the chain’s sustainability supply industry) cheerfully answers questions about his involvement with her. her husband’s post-Vanity Fair newsletter, AirMail (none “at all, it’s really her baby with Alessandra” Stanley, the former New York Times reviewer) and Graydon’s possible future involvement with Electragram .

“I’m sure he’s going to have fun, because, you know, from his spy days, and now his AirMail days and of course Vanity Fair in between, he’s got a good sense of humor,” she said. “And I’m sure he’ll give us great content too.”

Hanging from the ceiling above her (as in a photographer’s darkroom) are dozens of character illustrations drawn by her husband while they were in France. (“I think he has plans for them,” she said.)

His plan for Electragram includes recruiting fellow influencers — including Burch, Derek Blasberg and Jill Kargman — as emissaries. There are plans for limited edition creations by renowned artists and illustrators as well as collaborations with luxury brands. Through its website and social media, Electragram will also cover the state of modern etiquette via contributions from writers and illustrators. (There are no plans for traditional advertising on the website or Electragrams.)

“What we’re looking for — in addition to the solution to instantly send stylish notes — is a destination for exclusive editorial content,” she said.

There will be humorous writing, she explained. “So we’ll be having imaginary conversations between historical figures and historical retellings, which could be something like, oh if only Electragram had been around when Romeo and Juliet were going through all their stories. When Juliet texted Romeo to say that she wasn’t really dead, and he didn’t understand that, and then he came along and thought she was dead and killed himself… You know, this all could have been avoided.

Carter admitted that while she finds creative inspiration in the entrepreneurial spirit of the start-up world, it has its challenges, namely fundraising and continually refining the ground to raise more money. But, she said, “I really felt like Electragram was going to fill a need.”

Plus, it’s inherently eco-friendly, which is a priority for Carter, who is a sustainable fashion proselytizer and a board member of the Natural Resources Defense Fund for 15 years. (She moved to the honorary board last year.)

But with a myriad of free and low-cost e-card options, including legacy Evite and Paperless Post brands, who is Electragram’s target customer? “I think we’re talking about a savvy, sophisticated consumer who is looking for the ability to send a chic, personalized digital message,” Carter said. “And I think there are so many use cases for that. If you had a great dinner with friends who took you out to a fabulous restaurant last night, you’re probably going to email or text the next morning to say, “It’s so good to see you, thank you for this fabulous dinner”. .’ Now you’ll be able to send something that inspires the same delight as a handwritten note, but it will get there instantly.

This personalization is key to Electragram’s selling proposition. “People can create their own personalized stationery and write notes in their own words,” Carter said, “whereas for most e-card services there’s a level of design and it’s not particularly fancy. They’ve written most of the text for you, so there’s minimal customization.

And Carter hopes Electragram’s potential customers will include the nostalgia-obsessed Gen Z (the Carters have a 14-year-old daughter) and not just those of us who actually remember when the so-called Mail postal was one of the few options for the thank you note.

“Gen Z really loves nostalgia,” Carter said, “And so Electragram can be for them, the epistolary version of drinking a martini at Bemelmans Bar.”